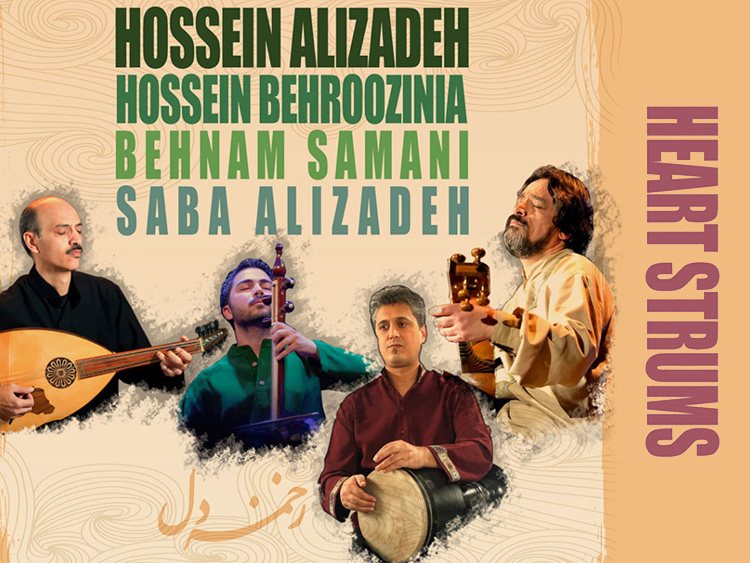 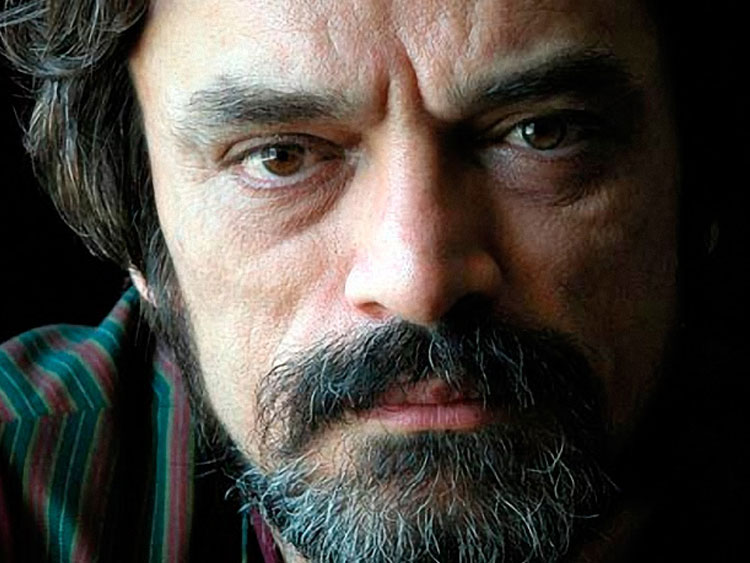 Hossein Alizadeh (Tehran-1950) is considered one of the most important figures in contemporary Persian music. He comes from a traditional training. He learned the Radif of Persian classical music with various masters of the tradition including PortraitHoushang Zarif, Ali Akbar Shahnazi, NurAli Borumand, Mahmood Karimi, Abdollah Davami, Yousef Foroutan, and Saied Hormozi and later recorded the entire body of the Radif based on the interpretation of Mirza Abdullah for Tar and Setar.

Hossein Behroozinia, was born in Tehran and lives in Vancouver, Canada. A child prodigy who was accepted into Tehran’s Conservatory of Music at the age of 9, he plays oud and barbat, an ancient Persian lute, for which he has written numerous compositions.

Virtuoso percussionist who plays daf, a frame drum, and Tombak, a goblet drum, was born in Iran and lives in Cologne, Germany. He has worked and played with the most prominent musicians and renowned masters of Iranian music, rendering not only complex rhythms, but also improvising unexpected melodies.

Saba was born in Iran and lives in California. He is a talented player of Kamancheh, a string instrument played like cello, whose sound resembles, yet strangely differs from, that of violin, viola, and cello. An accomplished classical Persian musician, he has also moved in the area of experimental electronic music.

Bush Hall is an independent live music & events venue in London W12 with a rock & roll history. Originally built in 1904 & used as a dance hall through the roaring twenties, the Edwardian venue has been a soup kitchen in WWII, a bingo hall and rehearsal space for the likes of The Who, Adam Faith and Cliff Richard in the late ’50s/60s, and finally a snooker & social club in the ’80s/90s, before being restored to its former glory in 2001 by present owners Charlie Raworth & Emma Hutchinson.

Iranian music is generally a vocal based music with classical Persian poetry of renowned poets such as Saadi, Hafez and Rumi, at its heart. Instrumental music is a more challenging form of the same art form where the musicians have to rely on their own powers of creativity and improvisatory instincts to create the landscapes generally produced by the less abstract art form of the poetry. The number of the musicians performing instrumental music are indeed far and few in between and in every generation of Iranian musicians there are only a handful of successful instrumentalists who have taken up this challenge. Not surprisingly the most renowned performers of instrumental music have also been the most successful composers of vocal music.

In the first of this Season of music from Iran’s series we are privileged to hear one of the most prominent Iranian composer/instrumentalists, Majid Derakhshani also known for his orchestral and large ensemble vocal-based compositions. Majid Derakhshani is accompanied by the celebrated nay player, Shaho Andalibi and on tombak percussion by Fariborz Kiani. The evening opens with the young virtuoso santour (dulcimer) player, Saeid Kordmafi setting the scene for an enchanting evening.

The second concert in the series is by the Grand Maestro Hossein Alizadeh, justifiably regarded as one of the most iconic Iranian musicians of the last half a century, known for his innovative approach to Persian music. While never severing the strong bonds to its roots, he is constantly stretching the boundaries in all dimensions. Accompanying Maestro Alizadeh are three of Iran’s most prominent musicians, Hossein Behroozinia on barbet (lute), Saba Alizadeh on kamancheh (spike fiddle) and Behnam Samani on tombak (hand percussion)

The third and final concert in the series is a concert by Keyvan Saket known for his technical wizardry on tar (six-string lute) accompanied by Soroosh Azemikhah on piano in an East-West musical encounter.

Entry Requirements: Under 18's must be accompanied